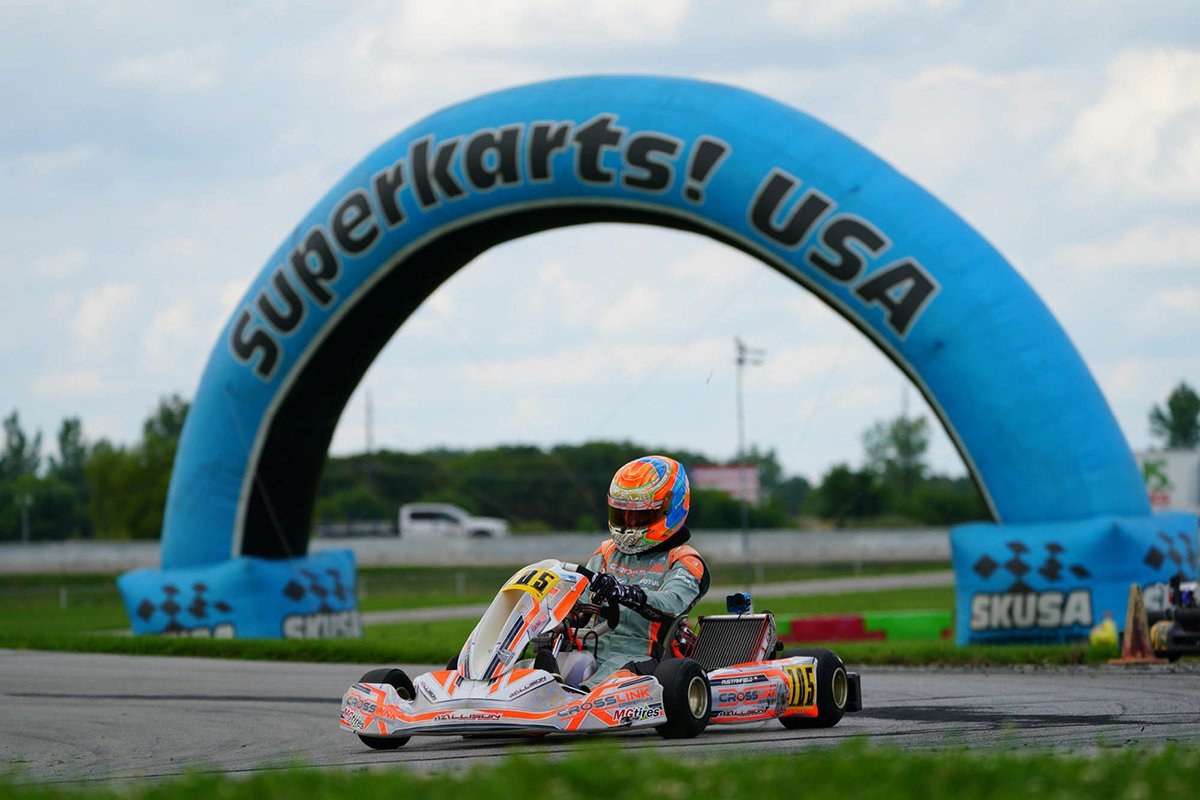 With COVID-19 putting a halt on the Superkarts! USA (SKUSA) Pro Tour back in March, series officials were forced to make alternative plans. Changing dates and locations for their May event, it was decided to run the six-race series at New Castle Motorsports Park during back-to-back weekends in August. Fast forward to today, and the first three rounds is now behind us with rounds four, five and six this coming weekend.

Competing on the Super-Mile layout, the normal just over a minute lap times were increased ten seconds as competitors were forced to come to grips with the new layout and technical downhill section. With only a few practice sessions to work everything out, Friday would be the first green flag of the series as Team Crosslink would aim for the top step of the podium.

“It was a good weekend, but a challenging one,” explained Team Manager Sean Owens. “We have made huge strides and have been victorious in both our kart and car efforts, but we want to keep pushing and keep winning.” Leading the way for Team Crosslink was X30 Junior competitor Alex Stanfield. The young Texan stole the show during Friday morning’s qualifying sessions stealing the pole position in the forty-plus kart Junior field. With three top-five results throughout the weekend, Stanfield was one of the more consistent Junior drivers finishing fifth, fourth and fourth through the three main events over the weekend.

Alejandro Jaramillo drove forward in each and every main event over the weekend with his best result coming on Sunday finishing sixth. Advancing four positions in Friday’s main event and doing the same again in Saturday’s final, Jaramillo moved forward six positions in Sunday’s final to narrowly miss the top-five in the sixth position.

Ryan Shehan was quick out of the gate but ran into some bad luck in the X30 Senior wheel-to-wheel racing. After qualifying fifth on Friday and showing pace to run in the top-five during the morning warmup sessions, Shehan’s racing luck was absent this weekend.

Owens added, “Feel bad for Ryan as he had the speed to be in the top-ten all weekend long but on track incidents relegated him down the running order. Alejandro drove forward in each and every main event, and we just need to get him starting a little further up the grid to ensure he can fight for victories.”

With no time off, Team Crosslink will return back to New Castle Motorsports Park this weekend and a different racing layout for rounds four through six of the SKUSA Pro Tour. Alex Stanfield will be back in the X30 Junior class while Ryan Shehan and Reilly Cann will enter X30 Senior. Alejandro Jaramillo will aim towards the front of the field in KA100 Senior while Miguel Mier will join the team in X30 Master. Stay tuned to the Team Crosslink social media pages for more news, information and photos.