Wins and Podiums for Team Crosslink at Road America 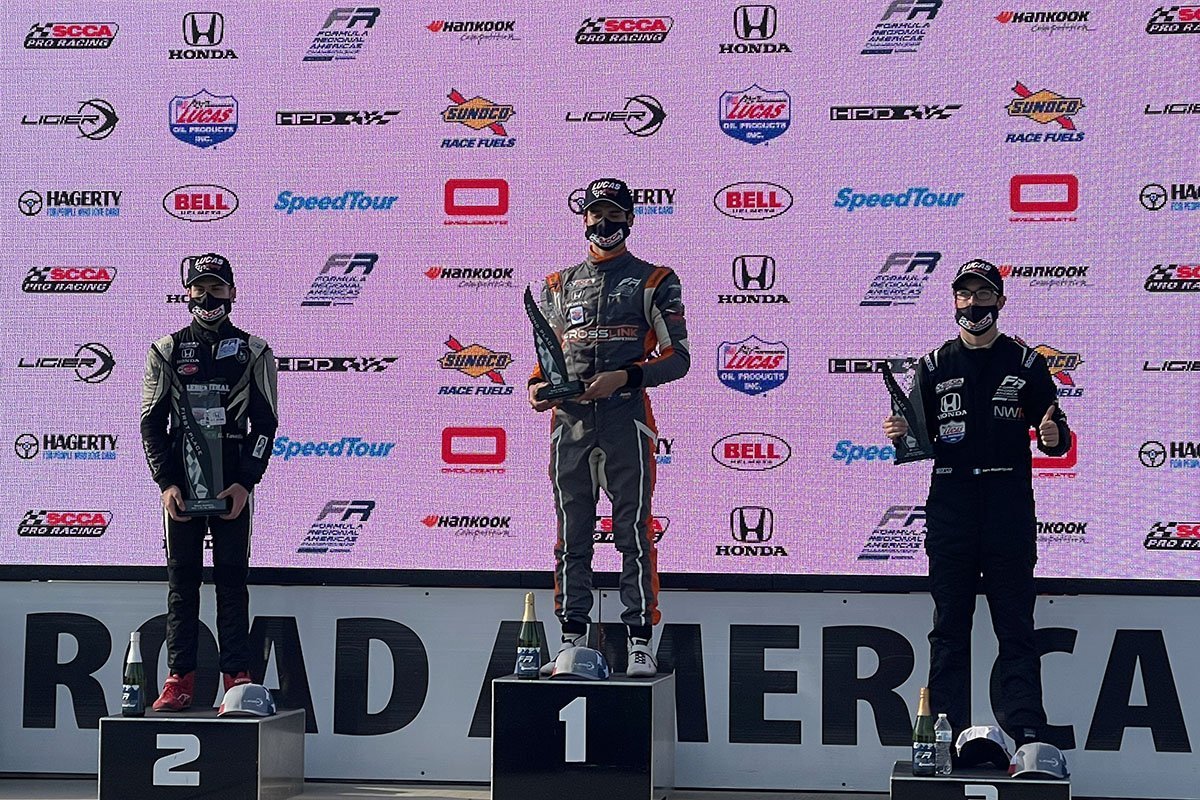 “Don’t really have many words except for that it was a great weekend,” explained Team Manager Sean Owens. “Everything is going in the right direction. Wins and podiums in FR as well as huge improvements by our drivers in F4. We are grooming champions from our karting program and elevating them through our internal ladder and making them race winners in cars.”

As rookies in the F4 United States Championship Powered by Honda, Trevor Russell and Ryan Shehan entered the event weekend having never driven a Ligier JSF4 around the 4.014 mile, 14-corner facility but after the first official day, you would have never guessed

“I am really proud and impressed with Trevor and Ryan’s progress,” added Sean Owens. “They have worked hard both on and off the track and the speed is coming. They are gaining experience with each passing lap and it shows in their results.”

With qualifying taking place on Saturday afternoon, Russell edged his Team Crosslink teammate on the results sheets as the duo finished seventh and eighth respectively. Returning to the track on Sunday for a pair of wheel-to-wheel races, Russell and Shehan both earned their first career top-ten results with fifth and seventh place finishes. With much of the race run under yellow flag conditions, series officials deemed that championship points would not be awarded but the results would stand. Back on the track later that day and both drivers yearning for their championship points, it was Shehan who would get the best of the two to score his first career F4 United States Championship point. After a brief stoppage due to an on-track incident, both drivers battled in the top-ten with Ryan Shehan finishing tenth and Trevor Russell twelfth. Monday morning would be a tough one for the Team Crosslink F4 competitors as a single file start to race three allowed for more green flag racing. Shehan eventually finished his weekend in P14 after being forced to take evasive action to miss an incident and falling back to 20th.  Unfortunately, Russell was involved in an on track incident and forced to return, eventually classified in the 24th position.

The FR Americas Team Crosslink duo of Josh Car and Dylan Tavella came to race at Road America and flexed their muscles in the one and only race they had on Sunday. Rocketing through the field and stealing the show, Car scored his first race win of the 2021 season while Tavella added another podium result in the second position to make it a Team Crosslink one – two finish.

The podium winning continued into Monday as Josh Car was able to add Team Crosslink’s third podium result of the weekend and second for himself with a second-place finish. Scoring the fastest lap of race two, Car also secured the pole position for race three on the weekend that would happen later in the day. Tavella, who ran in the top-three, early finished eighth on track after some elbows up racing sent him down the running order and outside the top-ten. Working hard to move his way back forward, the New Yorker was able to salvage some points with a top-ten finish.

The third and final FR Americas race of the event rolled off the grid on Monday morning and it was Josh Car that started from the pole position based on the fastest race lap from round five. Taking the lead earlier and holding off the advances of his fellow competitors, Josh Car looked like the victory was his until the very last lap of the race. Falling from first to fifth in the final stages, Car scored a fifth-place result after leading thirteen of fourteen laps while Tavella improved from eighth at the close of the first lap to finish sixth.

Owens continued, “It is a quick turnaround for us as our car program will head home to Texas while our karting program is off to Utah for an event this weekend. Busy times but we love it.”

Be sure to tune into the Team Crosslink social media pages for news, information, photos and results from the event.